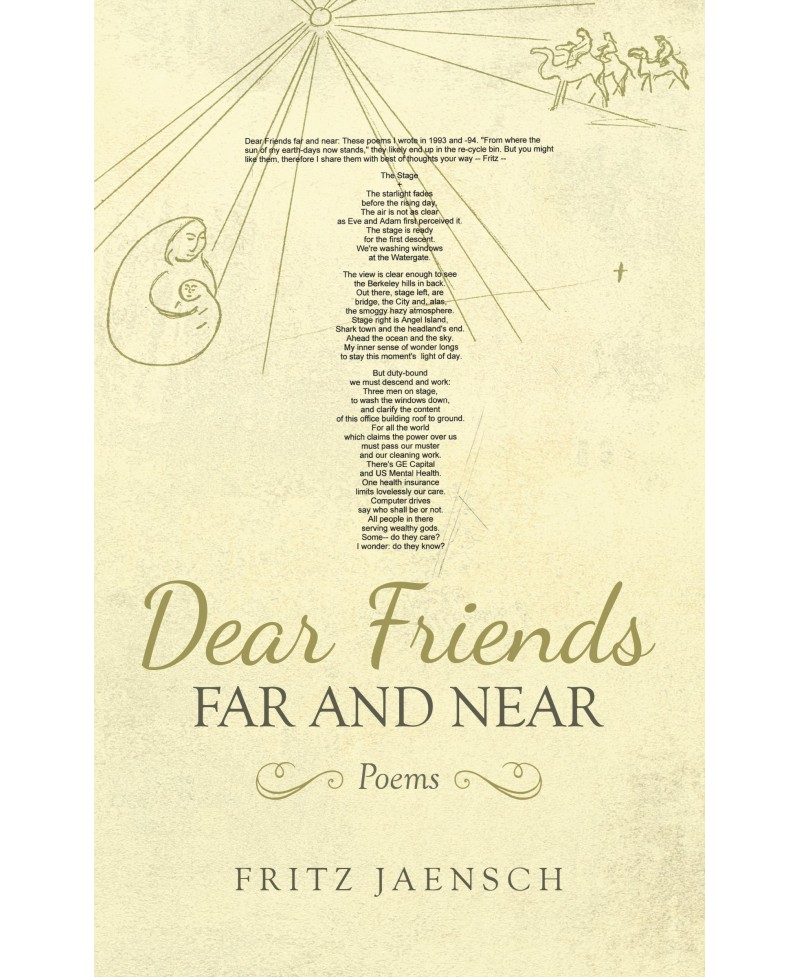 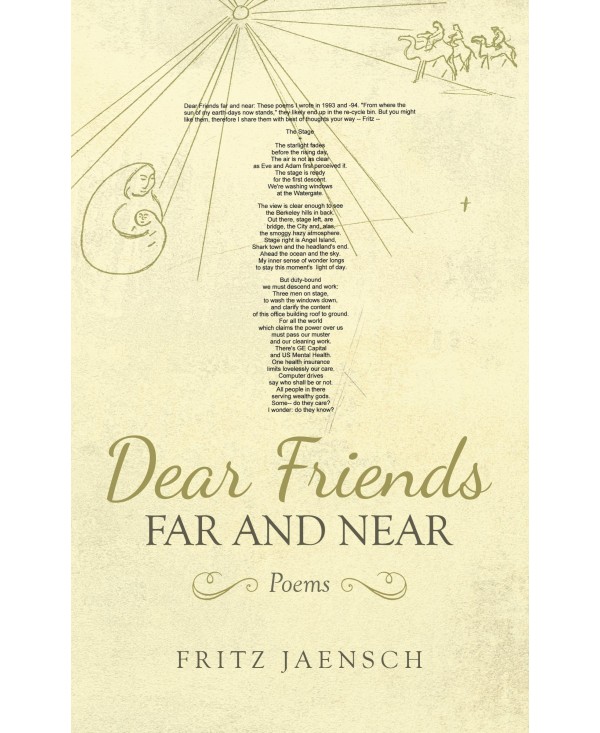 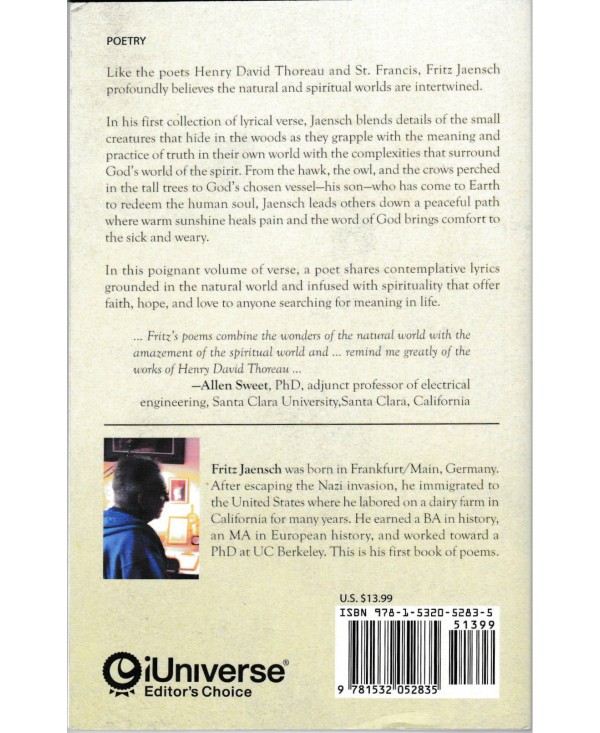 Dear Friends Far and Near

Like the poets Henry David Thoreau and St. Francis, Fritz's Jaensch profoundly believe the natural and spiritual worlds are intertwined. In his first collection of lyrical verse, Jaensch blends details of the small creatures that hide in the woods as they grapple with the meaning and practice of truth in their own world with the complexities that surround God’s world of the spirit. From the hawk, the owl, and the crows perched in the tall trees to God’s chosen vessel—his son—who has come to earth to redeem the human soul, Jaensch leads others down a peaceful path, where warm sunshine heals pain and the Word of God brings comfort to the sick and weary. In this poignant volume of verse, a poet shares contemplative lyrics grounded in the natural world and infused with a spirituality that offers faith, hope, and love to anyone searching for meaning in life. “Fritz’s poems combine the wonders of the natural world with the amazement of the spiritual world and remind me greatly of the works of Henry David Thoreau” (Allen Sweet, Ph.D., adjunct professor of electrical engineering, Santa Clara University, Santa Clara, California).

Fritz's Jaensch was born on August 2, 1934, in Frankfurt am Main, Germany. In 1936 his father, Wilhelm (designer, photographer, Bauhaus student), and his mother, Hella (a learned librarian)—both unemployed—took him back to their home city, Königsberg, in Germany’s East Prussia. Here Wilhelm found work as a policeman, while his widowed mother, Helene, welcomed the family to her home. It was only a block from Fritz’s mother’s childhood home, and it was no more than three blocks distant from Mrs. Berwaldt’s home, whose daughter, Hannah Arendt, had just fled Nazi Germany. But Hannah’s mother was unable to follow. Until she, too, managed to escape, her daughter’s friend Hella, Fritz’s mother, visited her as often as she could. In 1939, she managed to leave behind the land of deadly persecution that Germany had become, especially for Jewish and Romani people and the handicapped, and their friends. The United States took her and her daughter, Hannah, in as refugees. In May 1939, Fritz’s sister Johanna was born. Five months thereafter, the Gestapo came to the door and took their mother away. His mother’s cousin Hedel took the children in. Now Fritz's had two mothers—all that love. But now came the Great War that set loose all the horrors arising from the merciless grasp for power. Through all this time, Fritz’s life proceeded as if charmed, as expressed in lines from Psalm 91: “A thousand may fall at your side / and ten thousand at Your right hand; / but it shall not come near you.” The war came and went. And now the family became acquainted with starvation. That experience, verified in Holy Writ, prompted Fritz's to choose farming as his vocation. With no farm to inherit, he hoped to be able to earn a farm in the United States. Hannah Arendt sponsored his immigration in the spring of 1956. He went to work on a dairy farm in California. In the years to follow, his intellectual inheritance began to assert itself. His parents told him, “Fritz's, you are called to do more than milk cows. You read Shakespeare to your children.” Friends at church saw the same and recommended that he go to school. Taking the advice to heart, he went to high school, attended college for his BA in history and an MA in European history, and continued work in a PhD program at the University of California, Berkeley. All the while he did the work of a farmhand and did building maintenance—a wealth of learning, a life lived with gratitude.